Famous locations in London where asbestos can be found

Did you know about the famous places that contain asbestos in London?

You may be surprised to learn that quite a few famous locations in and around London contain asbestos.

Probably the most famous and most widely reported is the Palace of Westminster, or houses of parliament as most commonly known.

A report written back in 2016 by Goddard Consulting highlighted that there was significant danger to all persons in the Palace of Westminster.

This would include all MPs, visitors, peers and officials.

At the time of the report, investigations revealed that the 170 year old building contained asbestos in the hidden service shafts and piping ducts that lay behind the committee rooms and chambers.

The shafts were not properly sealed, therefore posing a huge risk to anyone within the building as they could inhale the deadly asbestos fibers.

Another famous building known to contain asbestos in London is St Pancras Hospital.

The asbestos is contained within the tunnels below the hospital.

Employees would use these tunnels on a regular basis years ago, although they’ve now long since been welded shut.

Because these tunnels were used by hospital staff over many years, there are fears that they may have contracted an asbestos related disease.

Earls court opened in 1937 and welcomed millions of visitors since opening it’s doors.

In 2010, the owners decided they wanted to redevelop the area with up to 8,000 residential flats, retail outlets and possibly a new convention centre.

Demolition and redevelopment of the site began in December 2014.

But there were fears at the time of the impending demolition about the amount of asbestos in the buildings and the risk posed to the public.

The developers reassured the public at the time and said all works carried out were to high Health and Safety and Environmental standards.

It is well known that asbestos was used extensively throughout the building of the London underground system right up until new laws were introduced in the 1980s and 1990s banning the use of asbestos.

But because it was used so extensively, it was impossible to close the underground to remove all the asbestos due to the disruption it would cause.

So because of this, much of the hazardous substance remains in the underground system.

The alternative option was to manage the problem as best they could, which they have done so far by painting affected areas with encapsulating paint.

But tube workers are concerned that the paint could easily chip off and expose them to the asbestos.

Despite these concerns, the transport service insist that they have taken every opportunity to remove asbestos where possible from the Underground system.

In 2015, it was reported that the Queen may have to vacate Buckingham Palace to make way for essential repair work.

Significant amounts of deadly asbestos needed to be removed as part of maintenance work amounting to the cost of £150m.

The other alternative was to carry out the works over a staggered rolling program, meaning the Queen wouldn’t have to vacate.

This was the option taken.

Work actually began on stripping asbestos from the building in 2012.

Almost £1m of public money was spent on stripping asbestos from the electrical cabling ducts under flooring in the south wing of the palace.

It was decided that the remaining asbestos is to be stripped out over the course of the next 20 years, with the cost amounting to over several million pounds.

The Excalibur Estate in Lewisham is made up of 186 prefab bungalows.

It was built in 1946 following the housing crisis after the 2nd world war.

These bungalows were riddled with asbestos.

Residents were still living in them more than 65 years after they were 1st built.

Because they contain so much asbestos, this has proved to be a stumbling block to redevelopment amid fears that residents have been affected by exposure to the asbestos over a long period.

The London asbestos factory was built in 1914.

Asbestos materials were shipped over from South Africa to the plant.

Hundreds of people worked there for many years until it finally closed down in 1968.

The asbestos factory has been identified as London’s biggest asbestos death blackspot.

The plant has left a legacy of death and compensation having forced Cape Plc to put aside £40million for ongoing claims equivalent to £70,000 in payoffs each week. 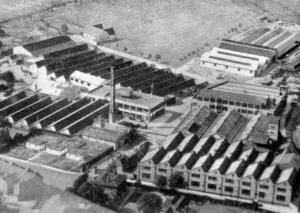 Do you have any concerns about asbestos in London?  Duty holders and employers have a legal responsibility to manage asbestos in their properties, carrying out an asbestos survey in their building so as not to put employees at risk of asbestos exposure.

If you think you have asbestos in London and would like to arrange an asbestos management survey, or a refurbishment/ demolition survey, contact us on 0161 763 3727 or by visiting https://www.armco.org.uk/