You may recall reading our news story from a couple of weeks ago over on our Asbestos Surveys website where we reported that Prestwick beach in Ayrshire had been closed off to the public amidst asbestos fears.  Read the full article here.

Well as an update to that news story, it has now been revealed that asbestos cleared from Prestwick beach weighs the same as a baby elephant!  And that’s just the start as apparently there’s much more that is still to be removed.

A reported 80 kilos of asbestos containing materials were discovered on the beach front during its week-long closure.

Residents are worried that the council are failing to deal with the situation due to costs that could arise from it.

The chair of Prestwick North Community Council,  Jim Ronney, said: “How long are we going to dance around this problem?”

“The council has been warned about the worsening condition of Prestwick beach for years and now, more than ever, we need action.” 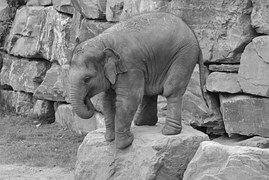 Breached sea defences are thought to have caused the problem

The theory is that breached sea defences at a landfill site in Ayr created a pile up of bricks and rubble three miles down the coast, but the council haven’t addressed the issue.

The council officer who discovered the asbestos on Prestwick beach said, “The council has clear responsibilities when it comes to the beach, but it seems they’re too busy ignoring what’s staring them in the face.”

But other council officials deny they are ignoring the problem.

A marine expert at Glasgow University has offered to carry out a report on Prestwick beach which the council are looking likely to agree to.

Mike Newall, the beach Manager said: “We need to know exactly what needs to be done and how much it will cost before we can move forward.”

“And, more importantly, we need to understand what the outcomes are likely to be so we can, as far as possible, take forward plans that will resolve the problem in the longer-term.”

“We’ve previously gone down the ‘trial clean’ route, spending around £20,000 in spring 2015 to clean up the beach and, just over a year later, we’re dealing with the same problem again.”

“That’s not something we can sustain.”

“We want to identify the best possible solution, in line with available resources, and that’s what we’re working to achieve.”