Derelict and dilapidated buildings tend to invite our natural curiosity.  We immediately want to have a nosey and see what it looks like inside.  We seem to be fascinated with old buildings that are no longer in use and have a history to them.

In fact we’re that nosey and inquisitive that in more recent years it has become a bit of a new trend and developed into a hobby for some people.  The new trend is known as ‘Urban exploration’.

This new hobby involves people exploring abandoned homes, factories, bridges, underground tunnels and towers. All completely unauthorised to do so and putting themselves in great danger.

Amongst these explorers are both professional and amateur photographers who are attempting to capture spectacular sights in these decaying buildings, but many don’t realise the dangers and so fail to protect themselves against asbestos exposure.  They simply have no idea that they risk developing asbestos related diseases such as mesothelioma.  Asbestos was largely used in construction before it was banned in the UK in the year 2000.

These photographers will do anything to get the perfect photo, but they don’t seem to realise that being inside these abandoned buildings poses a minefield of dangers, for example damaged flooring and stairwells, as well as nails and sharp objects on the floors.  Little do they know that asbestos is their greatest threat while exploring these old buildings.  The airbourne asbestos fibers can’t be seen with the naked eye.

The cancer develops after people inhale these airborne asbestos fibers.  Sadly, most of the people that develop the cancer will only live an average of one year after they have been diagnosed with the deadly disease.

There is an incubation period of between 20 to 50 years for mesothelioma to develop after being exposed to the asbestos fibers. 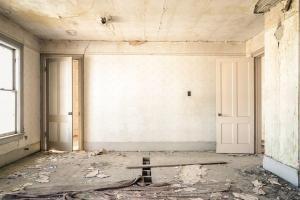 Asbestos was known for 100’s of years as an excellent fire retardant material, but it only began to be used extensively during the period of the industrial revolution.

There became a demand for low cost, mass-produced building materials at the beginning of World War II which led to a huge growth in the use of asbestos. Manufacturers used the asbestos fiber in a broad range of building products which included flooring, roofing, insulation and adhesives.

A total of 25 countries were producing almost 4.8 million metric tons of asbestos per year by 1977. And a further 85 countries were manufacturing thousands of asbestos containing items.  So this explains why there is such a huge risk when it comes to people who explore old derelict buildings.

Professional explorers are urging others to be on their guard and to take necessary precautions when exploring. They recommend the use of protective clothing and properly fitted face masks with asbestos filters.

Professionals also say that explorers need to be able to recognize asbestos within these buildings in order to avoid it. Because asbestos was so commonly used in flooring for example means that explorers may stand in it and risk transferring asbestos via their shoes to their home or public areas.   Therefore, they recommend that any protective clothing worn inside one of these buildings is removed on exit, washed and then sealed away in sealable a bag.

Cases of mesothelioma that are just being diagnosed are from people that were exposed decades earlier when the use of asbestos was widespread and way before any bans or regulations came into effect.

The asbestos materials lurking in old derelict buildings most likely passed through the hands of many people who unwittingly inhaled the fibers whilst making the building materials or installing them during the original construction of buildings.

These same materials that remain inside these buildings are still lethal and have the power to endanger another generation if urban explorers fail to protect themselves properly whilst exploring. Asbestos danger in derelict buildings is a rising problem we can’t ignore.

Duty holders and employers have a legal responsibility to manage asbestos in their building so as not to put employees at risk. Contact our Armco office for asbestos management and refurbishment/ demolition surveys on 0161 763 3727 or by visiting https://www.armco.org.uk/.  Alternatively call 0161 761 4424 or visit https://www.armcoasbestostraining.co.uk/ for enquiries or to book a training course.