According to a recent survey conducted by IOSH, asbestos ignorance is going to lead to more deaths.

Figures from the survey show that 1 in 4 construction workers believe they may have been exposed to asbestos fibers whilst at work.

This means they will be at greater risk of developing terminal cancers such as mesothelioma and other asbestos related diseases in years to come.

The UK have the highest asbestos related death rate in the world.

As such, these figures are worrying with so may workers being at risk.

IOSH (The Institution of Occupational Safety and Health) have launched a campaign to raise awareness of and tackle the problem of asbestos exposure at work.

Their survey findings are being released to coincide with the campaign ‘No time to lose’.

A third of people who completed the survey said they’d never checked the asbestos register before starting a job.

Half of these people didn’t even know there was an asbestos register in the 1st place!

One in five wouldn’t know what to do if they discovered any asbestos in the building.

These finding have understandably caused some concern amongst health professionals and health and safety experts.

New Chair of the UK’s Industrial Injuries Advisory Council and a leading expert on workplace carcinogens, Dr Lesley Rushton, said, “What these new survey results confirm is that, while people have heard of asbestos and know what the effects of being exposed to it are, they’re not sure how to check if it’s present and they may not know what to do if they find asbestos.”

“Uncertainty and ignorance surrounding how to prevent workers from breathing in the fibers is deeply worrying.”

“This is particularly the case among small companies, sole traders and older workers. It is crucial that we reach them, to inform them of the risks and how these can be managed, to ensure their future health is not compromised.” 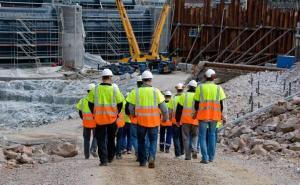 Not enough being done to protect workers

IOSH President, Craig Foyle, said the survey demonstrates not enough is being done to protect our workers.

Craig said, “Asbestos is banned in the UK and other countries for a good reason: it is dangerous. It is staggering to see how many people die from exposure to asbestos every year. That is well over 100,000 families suffering the devastation of a lost loved one.”

“It is unacceptable, therefore, for anyone in any workplace to be exposed to asbestos. Clearly, though, people are being exposed to it. In the decades to come, it is likely that these people and their families will still be suffering unless we all do something about it.”

“We are calling on everyone, including employers, to do the right thing; to protect the people who work for them. IOSH has an array of resources designed to assist employers put measures in place which protect their workforce.”

If you would like more information about the ‘No time to lose’ campaign by IOSH, please visit www.notimetolose.org.uk